April 5 was an important day for Svitlana Slesarenok, environmental expert and activist from the NGO Black Sea Women’s Club from Odesa, Ukraine, as she gave the opening speech for the Civil society forum ahead of the Regional Sustainable Development Forum of the UNECE region in Geneva.

As an ecofeminist network we want to provide space for the stories of inspiring champions in the field of gender equality and the fight against climate change and environmental pollution. We believe that a sustainable future and environment needs feminist solutions reflecting the lives of people on the ground. That is why we work on transformative gender equality and women’s human rights in interconnection with sustainable development and climate justice. One of these champions is Svitlana Slesarenok. Svitlana is the Chair of BSCW, a Ukrainian NGO established in 2007. BSWC is a regional network of women leaders and environmental NGOs working on the protection of the main rivers, Danube, Dniester and Dnipro flowing into the Black Sea.  But Svitlana suddenly became a refugee 5 weeks ago. When Russia invaded Ukraine on February 24th Svitlana along with her grandchildren fled to a safe place in Romania, where she created a volunteers network with Ukrainian NGO activists, organising help to defenders of the southern Ukrainian cities.

Why women are essential for sustainable development

Apart from her work as chair for Black Sea Women’s Club Svitlana is also an outspoken ecofeminist. She has been a long-term partner of WECF. She was a member and co-chaired our International Advisory Board for 12 years. And already in 2002 she co-wrote the WECF publication “Why Women are Essential for Sustainable Development”.

“The Stockholm Declaration adopted in 1972 by the United Nations Conference on the Human Environment was the first document to recognize the interconnections between development, poverty, and the environment. Fifty years since Stockholm, the global community has worked a lot for developing a common understanding and the instruments to achieve a healthier planet and prosperity for all. Our planet faces increasing environmental challenges and growing inequality affecting development and wellbeing, but now at least we have some important instruments, such as the 17 Sustainable Development Goals, adopted by all governments in 2015.”

“This year we are specifically looking at progress on the #SDG4 on education, #SDG5 on gender equality, #SDG14 on seas and oceans, #SDG15 on forest and biodiversity and #SDG17 on partnerships and implementation. “We were seeing some real progress in our region. We were working with environmental and climate experts from all over the former Soviet Union on renewable energy to address climate change, on protection of our seas and our biodiversity. And then, on the 24 Feb 2022, Russia started a war against my country, the sovereign state of Ukraine, reversing progress on the 2030 Agenda, endangering world peace, food security and sustainability, resulting in millions of refugees and thousands of dead and injured. We need together to stop the war, respect and uphold international law, build peace and find a way how to protect our common values: for a healthy planet for the prosperity of all – this is our responsibility.”

“This war is not a war only against Ukraine, it is a war against sustainable development of our planet, SDGs, humanity.”

Svitlana has, for year and years, vehemently proposed an alternative to nuclear energy already speaking at many events:  “Ukraine is one of the most energy wasting countries in the world – our energy use is three times higher than our neighbour Poland.  Only if we will be more energy efficient we can eliminate dangerous nuclear power from our lives. And, we are not the only ones.  The list of countries that waste energy is long. Nuclear energy currently provides only 2 to 3% of total energy worldwide, we can easily eliminate that by energy saving – we see energy efficiency measures as a path to a safe energy future.”

In her opening speech she also warns about the dangers of nuclear energy and how to prevent health hazards, when Russian troops bomb nuclear plants. “There is nothing more unsustainable for the planet than war and militarism. We might be close even to a nuclear war… You might have seen the photos of the hundreds of brave citizens of Energodar City that stood in front of the Russian tanks to try and stop them from going to our biggest nuclear power plant of Zaporozhye. The daughter of my brother in law participated. Today, SDG15 for Ukraine and neighbouring countries forest and biodiversity protection means dealing with the terrible pollution of water, soil, and air pollution from bombed-out oil storage facilities, the burning of bombed out roads, petrol stations, and other infrastructure. In particular we are very worried about a number of forest fires in Chernobyl’s ‘red’ forest, as a result of the shootings, which has led to increased emissions of radioactivity. “And we are in fear of the potential threat from Russian attacks and accidents at our other nuclear power plants. Today, unfortunately, due to the war, addressing SDG14 in the countries from the Black Sea region means we must remove from the sea, unexploded mines and shipwrecks – destroyed by Russian missile ships. The Russians put 4200 mines in the black sea”.

“The number of women in the army, which was already high, is now almost a quarter of the total army, 57.000 women soldiers, mostly young women. The doctors and nurses working partly in bombed-out hospitals and with a lack of medicines, many are women, like my daughter in law. These women stay in the war. Their children have to flee the country without their parents, like in our family, where I am now looking after my grandchildren. Me and my grandchildren, we are refugees in Romania.”

Regarding SDG 5, Svitlana mentions that many many women and girls are dead, suffering from rape, abuse and horrifying violence by Russian soldiers. “According to the Prosecutor General’s Office of Ukraine, as of March 30, 2022, 150 children were killed and more than 222 children were injured in Ukraine, but this is without counting the dead children in the occupied cities like Mariupol. Many are refugees. 4 million refugees have left Ukraine, as of March 31, and we have about 6 to 12 million people who have been internally displaced. We fear maybe 5000 people have been killed in Mariupol, but the red has been refused access”.

Regarding SDG4 Svitlana says: “You have probably seen the horrific photos this weekend from Bucha, where more than 400 civilians who were massacred. For Ukraine today it means more than 211 schools have been bombed, destroyed…children are no longer going to schools, and many have died. They have stolen our dreams of sustainable development. The war is a crime against our common future, against our sustainable and inclusive future.”

“We must clearly and distinctly understand that this war is not a war only against Ukraine, it is a war against sustainable development of our planet, the SDGs, humanity, and the common values we developed together these last 50 years. We need together to stop the war, respect and uphold international law, build peace and find a way how to protect our common values: for a healthy planet for the prosperity of all – this is our responsibility”. 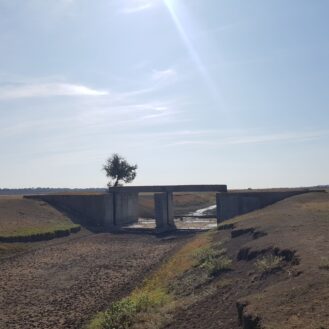